Tonight I have to make a quick chicken dish when I get home from Kidz Club. Then it's the season premiere of Lost, which I am totally pumped about. Even though I am not of Italian extraction I find myself doing a lot of Italian dishes because they are quick and easy.

Chicken Cacciatora is "hunter's chicken". It is chicken browned and then stewed in mushrooms, onions, tomatoes and green peppers. I try to sneak a little heat in in the from of crushed pepper, but the girls don't like hot stuff so I have to be careful.

I am going to serve this over farfalle pasta. It would also be nice with a side of potatoes roasted with garlic and rosemary.

1 frying chicken cut into pieces
2 T. olive oil
1 green bell pepper, cubed
1 large yellow onion, sliced
1 12 oz can of tomatoes
10 or so mushrooms (porchini will give the most flavor, but white mushrooms are OK in a pinch)
1/4 t. crushed red pepper
1/2 c. dry red wine
Salt and pepper to taste

Brown the chicken until well carmelized in 1 T. olive oil. Remove from pan. Cook the bell pepper, and onion until soft. Remove from pan. Saute the mushrooms in another T of olive oil. Deglaze the pan with red wine and reduce by half. Add the tomatoes and the red pepper. Return chicken and vegetables to the pan. Cook for about 45 minutes until chicken falls off the bone. Taste and adjust seasoning

Serve over pasta.
Posted by Unknown at 1:15 PM No comments: 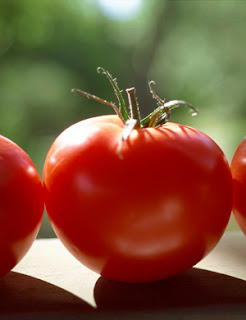 Well, today I am cooking my wife's best friends spaghetti sauce. Since I am not Italian I can get away with calling it spaghetti sauce. It is actually known as "gravy" a term I have picked up since all the paisanos from Brooklyn started moving down the shore. One of the wonderful benefits of that migration to us beach bums is that our stores are now filled with the best Italian provisions and there are several Italian specialty stores where you can get fantastic bread from Brooklyn or Newark, NJ.

Before Mary taught my wife to make sauce, I was never very happy with our attempts. It just was never right. Mary generously unfolded for us the secrets of the best sauce I have every had. Here are some of the secrets. First of all, you must brown the tomato paste in olive oil before adding the rest of the tomatoes. The carmalization of the tomato paste adds to the depth of flavor so it is important not to skip this step. Another secret is to infuse the olive oil with onions and garlic rather than cooking the onions and garlic along time in the sauce. A final secret has to do with the tomatoes you use. It is important not to use imported tomatoes. The reason this is the case is that imported tomatoes are a cooked product. This is to get around import taxes on imported vegetables. If you use American tomato products you get more actual unadulterated tomatoes. (Who knew?)

So here goes the recipe. The recipe make quite a bit and it freezes well.

In a large stock pot, sweat the onions and garlic in the olive oil until the onions are soft and translucent. (Adding a couple of pinches of salt at the beginning of cooking helps this along). Remove onions and garlic from pan, drain as much olive oil as possible back into the pan. Over high heat brown the tomato paste in the olive oil. Add the garlic powder, about 2 t. of salt and 20 grinds of pepper to the tomato paste. Blend in while continuing to cook a bit longer. Add the crushed tomatoes and the tomato sauce. Taste and correct for seasoning. If the sauce is to acid add a couple of teaspoons of sugar. Bring to simmer. At this point I put aside a couple of cups of sauce for my son who is a vegetarian. Add sausage that has been browned on all sides (again the browning is important as it adds to the flavor profile) and the meatballs. It is actually the addition of and cooking with the meat that turns the sauce into "gravy". Cook at a slow simmer for 3-4 hours.

Preheat oven to 375%. Beat the eggs together with the parsley, cheese, salt and pepper. (Go easy on the salt as the cheese is salty). Mix in the garlic. Mix the meat into this mixture. Add enough bread crumbs so that the wetness is gone and the mixture holds together well. (About 3/4-1 and 1/4 cups). Make sure the everything is mixed together well.

Dip your fingers in oil. Roll mixture into balls about 1 and 1/2 times the size of a golf ball. Place in baking dish. Add about 1/4 of an inch of water to the baking dish. Bake in oven for about 40 minutes until the meatballs are browned. Add the meatballs to the sauce.

It is our family tradition to cook a Beefsteak dinner on New Years Eve. For those of you who don't know, "Beefsteak" is what a whole beef tenderloin roasted in a "cast" of Kosher Salt is called in North Jersey. The meat is cooked rare, sliced thin, dipped in melted butter, and served on thin sliced Italian or just plain white bread. It is always accompanied by a "relish tray" of raw carrots, celery, scallions, radishes, olives and pickles. Sometimes people serve fries at a Beefsteak dinner, but I have always thought they fill you up to much to have room for the star of the show.

I have never heard of this style of cooking a beef tenderloin outside of my native North Jersey, but in those parts there are whole businesses built around doing "Beefsteaks". It is common for organizations to hold Beefsteaks as fund raisers. They are also often done for political fund raisers. The best way to do a beef steak though is with a bunch of friends for a special time of celebration.

When I was growing up my uncle used to cater Beefsteaks and this is how the tradition got handed down to me. I have old eight millimeter films of my parents hosting new years eve Beefsteaks our house in Clifton. (My folks were quite the party people in those days.) One wonderful memory I have is of sitting in School # 4 on West 2nd Street and smelling the delicious aroma of beef steak roasting in an open pit at Hap Nightingales, the beef steak caterer next to the school. (By the way, Hap Nightingale is still owned by the Nightingale family in the same location they have been cooking Beefsteaks for the last 60 years.)

This year we had our beef steak at the home of Russ and Debbie, in Lancaster, PA. We introduced the tradition to them a few years back and Russ always wants to get together to Ring in the New Year with this decadent tradition. He invited a few friends over to join us, so the tradition is spreading outside of it's North Jersey environs.

You can find different recipes for salt crusted beef tenderloin on the Internet, but all of them complicate this simple way of cooking this select cut of beef.

Here is my recipe for how to cook a Beefsteak. You have to follow it to a T to get the full North Jersey experience.

Moisten kosher salt with enough water so that it just sticks together.
Place tenderloin in a low sided pan, bend thin end of tenderloin up so that the girth of the meat if fairly uniform. Put a meat thermometer in the thickest part of the beef. Encase the beef fully in the salt so that is completed covered with about 3/4 of an inch of salt and no meat is showing through.

While meat is resting heat butter in a roasting pan until it is just melted.

Rinse salt off meat. Slice it thin. Place sliced meat into melted butter. Meat should be rare to medium rare. You can cook it to be more well done in the butter if desired, but this is not recommended.

Serve meat on thin slices of bread. Pass around the relish tray, and the fresh ground black pepper. A traditional thing to drink with a beefsteak dinner is red birch beer on tap.
Posted by Unknown at 10:08 AM 12 comments: