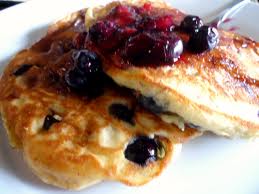 This morning I woke up to a beautiful Saturday morning at the shore and I thought about heading over to Bennie's Diner. But then I saw the flat of fresh Jersey Blueberries on the counter and I thought . . . Blueberry Pancakes.  I love to go back to my short order days and cook up a batch of pancakes or homefries and eggs or whatever.  I have a great cast iron well seasoned griddle that covers two burners so I feel like I am back to at my old station at the Sign of the Fish Restaurant in Ocean Grove, where I got my culinary start.  Here's a great recipe for Blueberry Pancakes.  They were very tasty, especially with the blueberry syrup as a topping.

Combine all dry ingredients with a fork.  Mix butter into milk and wisk egg into milk.  Combine milk mixture with dry ingredients until everything is wet but batter is still lumpy.  Fold in blueberries.

Grease griddle with a bit of oil on a paper towel.  When a couple of drops of water "dance" on the griddle it is ready.  Drop about 1/3 of a cup of batter on griddle.  When the edges begin to dry and there are hollow bubbles on the surface of the pancake, turn it over and cook until top of pancake begins to get soft.  Put finished pancake in a covered dish until you've finished cooking all the batter.  This should make 16 pancakes.

Boil blueberries in syrup until they begin to explode.  Pour over blueberry or regular pancakes. 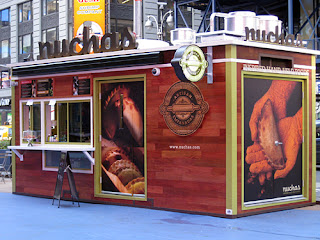 Had a pretty awesome snack from Nuchas Gourmet Empinadas food truck.  The short rib empinadas are the bomb. We stopped by while waiting for traffic in the parking garage to clear after seeing Anything Goes, which was a pretty good show. Best tap dancing (actually the only tap dancing) I have ever seen.
Posted by Unknown at 1:56 AM 1 comment:

A Trip to the Belmar Seafood Festival 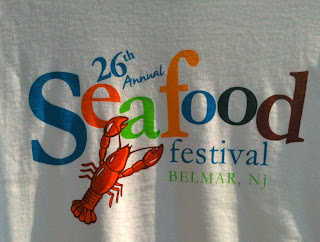 The gang and I spent this past Sunday afternoon at the 26th Annual Belmar Seafood Festival.  It was a great time dampened only a little bit by the heat and the huge crowds.  One of the perks of living at the Shore is to be able to jump in the car and drive to a festival like in just few minutes.  There is music, craft and other non-food fenders, and a giant wine and beer tent, but of course the real draw is seafood. 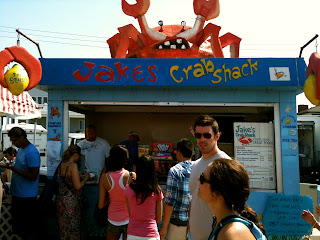 Some of my favorite Belmar area seafood restaurants were there including Mr. Shrimp (my current favorite) and Ollie Klein's (the fish I grew up on when the owner was the chef at Evelyn's which has sadly departed from the Belmar restaurant scene.)  There were some higher end representatives including Mumfords, 40 North Oyster Company and Anthony's of Little Italy.  However at an event like this, the key is to eat seafood you love in as close to it's natural state as possible.  The highlight of my eating adventures was a platter of 4 cherrystone clams and 4 nice plum oysters.  What made it taste even better is that this delectable plate of raw mollusks cost me only 5 bucks. It was pretty impressed with the shuckers.  The guy who was preparing my plate told me that he shucks about 2000 briny packets a day. 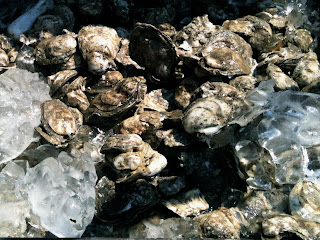 Nick joined me in his own feast of raw mollusks.  Bria chose a platter of seared tuna, coconut shrimp with a side of rice and arugla. Becca had a crab cake sandwich and a buffalo shrimp taco.  Christine enjoyed a New Jersey speciality, deep fried crunchy soft shell crab on a sandwich with lettuce and tarter sauce. 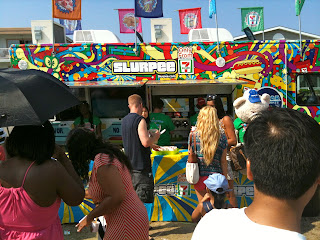 There were some great choices for deserts if you were interested.  Nick opted for a deep fried oreo which was shared among the group.  Becca had a crape folded over a ricotta and chocolate chip filling.  For me, being the frugal guy that I am, I was thrilled that 7 Eleven had a truck there giving out free, pretty generous samples of slushy. 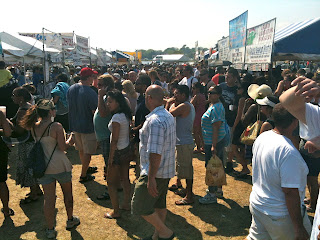 If you plan to attend the Belmar Seafood Festival next year, I would give you two hints.  Try to go on Friday night.  The attendance is a little lighter and according to one of the worker, this years festival had the largest attendance in it's history, so on the last day, crowds were definitely bordering on intolerable. The second hint is to park in at the Marina or train station and use the free shuttles provided by the festival.  I am looking forward to enjoying some of the other great foodie and fun festivals this summer.  It's great to live at the Jersey Shore.  Enjoy!
Posted by Unknown at 12:23 PM No comments:

This past fall, I had one of the best fishing trips of my life. Frank, Matt and I boarded the Gambler in Point Pleasant, NJ in quest of the mighty striped bass. This is game fish that had been overfished in Jersey waters to the point of extinction a few years ago. Thankfully, agressive fish management has brought back the stocks in Jersey to level that enabled our party to limit out with lunker bass that looked like this:

All conscientious foodies should be concerned about the problem of overfishing.  Only sustainable fish should be eaten.  Here's why:

Ending Overfishing from OCEAN2012 on Vimeo.

Here is a handy dandy guide to help you make ethical choices when it come to eating seafood:  Seafood Watch.