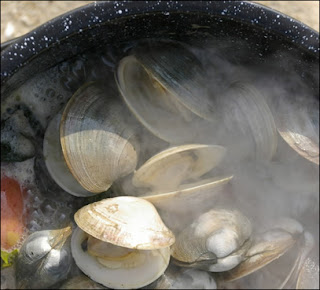 I grew up eating hot and steamy bowls of clam chowder when I was a kid spending my summers at the Jersey Shore. My very first summer job was working at the Sign of the Fish Restaurant on the southend boardwalk in Ocean Grove, NJ. Dave Shotwell and his lovely wife ran it for a couple of summers when he was taking his summer break from directing the marching band at Neptune High School. My official title my first year there was dishwasher, but Mr Shotwell would often use me to do the peeling and chopping for the soups that were a staple of the menu. This is where I learned to love the kitchen and cooking. Mr. Shotwell cooked up a very awesome clam chowder that would sell out in one day. My clam chowder recipe tries to recall the flavors from the Delicious steamy bowl I used to help make back in the day. Of course it's base is a tomato infused clam broth, enriched with bell peppers, potatoes and flavored with a good dose of black pepper and thyme. It is so simple to use fresh clams and so economical, at least in our area, that I can't imagine why anyone would use the canned stuff. Give my recipe a try and let me know what you think.

Wash off clams, make sure they all alive, steam in a closed pot until clams are open. Remove clams from pot, when cool remove clam meat from shells, chop and set aside. Strain cooking liquid through paper towel or coffee filter in order to remove sand. Set aside.

Cook bacon in bottom of pot until rendered. Drain off fat and return bacon and 2 T of bacon drippings to pot. Chop vegetables into about a 1/2 inch dice. Season with salt. Sweat veggies in bacon drippings over medium heat until onions are clear.

Add the clam broth and clam juice to the vegetables. Add the tomatoes, by leaves, thyme and pepper. Simmer for about an hour or so. Add the potatoes and cook until they are soft but not mushy and soup has begun to thicken (20 or 30 minutes). Add clams. Cook for another 10 minutes or so. Taste and correct for seasoning with salt and pepper.

Serve chowder in bowls garnished with parsley with oyster crackers on the side.