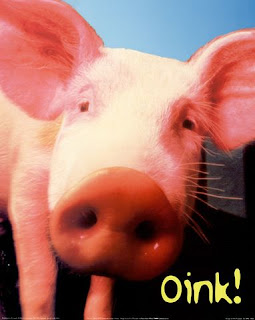 Schnitzel is one of those common Northern European dishes. It is most commonly made with veal, but given that it is so expensive, I make mine with pork. I don't know where we got the recipe for the gravy we serve this with or what ethnicity it is from. I do know that my grandmother who passed away in the 1960's was the one who handed this recipe down to my mother, who then handed it down to me. It is definitely on of our family favorites.

You could serve this with boiled or mashed potatoes, but I prefer noodles, which I always dress with brown butter. The brown butter imparts a nutty sweet flavor to the noodles. I also usually serve this with red cabbage, but the asparagus are really good right now so that's what we had for the vegetable.

Pound the chops or cutlets until they are about a quarter of an inch thick. Mix about 1 t of salt and 1/4 t of pepper per cup of flour. Dredge pork in flour. Shake off excess flour, dip in beaten eggs and then breadcrumbs.

Heat oil and butter in pan until it is shimmery. Brown the pork on one site until it is a deep golden brown. Turn over and brown on other side. Drain pork of excess fat on a paper towel or brown paper bag.

Discard excess fat from pan. Heat butter in pan until it bubbles. Add onion and cook until clear. Add water and cook for a few minutes more scrapping off all the brown goodness from the pan. Reduce by 1/2. Add ketchup and cook until sauce is thick enough to coat a spoon. Serve on the side of the schnitzel.
Posted by Unknown at 7:16 AM 8 comments: